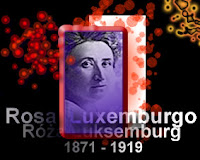 December 30, 2009-IT'S TAKEN NINE DECADES, but the unclaimed female torso that was fished out ofBerlin's Landwehr Canal in the spring of 1919 has finally been released for burial. It had been kept on display in the pathology department ofCharité Hospital as a classic example of a water corpse or "floater" until 2007, when Dr. Michael Tsokos, the department's director, noticed it and determined that it probably belonged to the murdered German communist leader Rosa Luxemburg.

Tsokos announced his discovery to the press last spring and promptly issued a call for genetic material in order to confirm his suspicions (I have already written about this case here and here). But afterover a year of study and nine months ofmedia overkill, Tsokos has finally laid down his scalpel. "There are indications that it could have been Rosa Luxemburg," the public prosecutor's office told the Berlin daily Tagesspiegel on Monday, "but they have not been enough to provide conclusive proof." DNA extracted from the hair of a living relative in Israel did not match that belonging to the cadaver - Tsokos himself stated last summer that the chances of a match stood at only forty percent anyway. Now the remains will finally be buried at an undisclosed location. Testing will continue on tissue samples, however, and a positive identification cannot be ruled out in the future.

But none of this should surprise us. Yes, the identification of Tsokos's "floater" as the mortal remains of Luxemburg, who was murdered by government troops at the end of the Spartacist Uprising on January 15, 1919 and then thrown into the canal (the body later interred in Berlin's Central Cemetery probably belonged to another woman, Tsokos concluded after examining contemporary reports), would have represented a very bright feather in the media-savvy doctor's cap. But even without proof, he nevertheless captured the headlines several times in 2009 and gave both his new best-selling book and his forensics exhibition at the Charité's medical-historical museum a mighty boost. So we need shed no tears for Tsokos - but a few might be appropriate for the thousands of victims of the German revolution of 1918/19, whose cruel fate is symbolized by the Charité floater, whoever she may have been.