Ensure that those responsible for the brutal beatings and rapes of the women of Atenco are brought to justice. 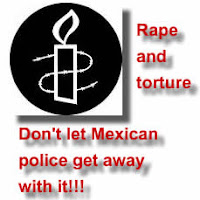 It's going to take more than the Supreme Court's resolution to bring justice to Mexico.
Ensure that those responsible for the brutal beatings and rapes of the women of Atenco are brought to justice.

What do you do when the Supreme Court stands with you and your government works against you?

Last month, the Mexican Supreme Court confirmed that women in San Salvador Atenco suffered major physical and sexual abuse at the hands of police officers. But even with the affirmation of the highest court in Mexico, the women in Atenco are still waiting for these officers to be held accountable for their crimes.

The current Attorney General of Mexico, Eduardo Medina-Mora, remains suspiciously silent on this case that his office is responsible for handling. But it doesn't take much investigating to find out why: At the time of the attacks, Medina-Mora was in charge of the same police officers who were implicated in the assaults. Any real investigation into the attacks and arrests could surely place significant blame squarely on his shoulders.

If securing justice continues to rely on Attorney General Medina-Mora, then the police officers guilty of brutally beating and raping the women in Atenco will remain free to roam the streets, a threat to those they're meant to protect.

We are alarmed at reports that Mexican police officers physically and sexually assaulted more than two dozen women in San Salvador Atenco in May 2006 following a public protest in support of local flower sellers. At least 26 women filed complaints alleging they had been subjected to torture, including sexual violence, by police officers. We are appalled that authorities have failed to adequately address these grave abuses.

We welcome the Mexican Supreme Court's affirmation in February 2009 that serious human rights violations took place in San Salvador Atenco in May 2006. We call on you, Mr. President, to show leadership and ensure that federal authorities carry out a thorough and impartial investigation into these abuses. Of nearly 3,000 federal, state and municipal police involved in the Atenco operations, not one has been adequately held accountable for human rights abuses inflicted at the time. We urge you to see to it that all those responsible for crimes against the women of Atenco are brought to justice and that adequate reparations are provided to survivors and their families.