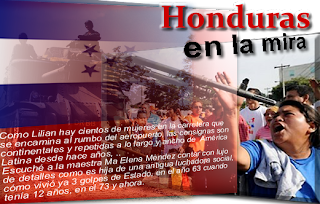 On Nov. 2 representatives from Honduran women's organizations presented a grim panorama of violations of women's human rights by the de facto regime led by Roberto Micheletti before the Inter-American Human Rights Commission.
Their testimonies provided documented proof that the coup regime and its security forces have been responsible for rapes, beatings, murders and harassment of Honduran women in the resistance movement, and the dictatorial elimination of gains in gender equity. These crimes against women have been committed in the context of impunity for the perpetrators.
As the U.S.-brokered agreement between Micheletti and the legitimate government led by President Manuel Zelaya falters, the on-going crisis in Honduras continues to claim victims and women are particularly at risk. As in violent dictatorships throughout history, women's bodies have become a battleground. Honduran women have formed the backbone of the resistance movement against the coup from Day One and suffered systematic and gender-targeted repression as a result.
Honduras has a strong and organized feminist movement. This movement came together, fortified by the integration of hundreds of independent women, in the coalition Feminists in Resistance following the coup. It has seen its members beaten, its hard-fought gains rolled back, its institutions taken over and its projects for gender equity in public policy shattered over the past four months, under an illegitimate and ultraconservative regime. Despite the personal risk and the continuous setbacks, it remains strong and united and committed to restoring the rule of law necessary for peaceful advances in women's rights.
During this week, which many hoped would mark the return to constitutional government, the coup regime made another key move against women's rights. On Nov. 3, a law pushed through the day after the coup by the de facto regime went into effect that prohibits the morning-after pill, ignoring Honduran women's demands for the right to make their own decisions on reproduction and denying the basic tenet of separation of church and state.
The rapid deterioration in respect for women's rights in Honduras can only be halted by an immediate return to a constitutional government. An agreement brokered by the State Department has so far failed to resolve the crisis and end the coup. This can be attributed in large part to a message from State Department official Tom Shannon that cast doubt on the U.S. commitment to reinstate the elected president, emboldening the coup regime in its efforts to preside over elections currently scheduled for Nov. 29.
In a famous speech to the Beijing conference in 1995, Hillary Clinton proclaimed that "women's rights are human rights" and that "women will never gain full dignity until their human rights are respected." As Secretary of State, she has publicly affirmed that women's rights will be a pillar of U.S. foreign policy. However, Clinton has yet to acknowledge the growing evidence of the violation of women's rights under the Honduran coup regime. It is time to take a firm stand to restore respect for human rights and end the coup.
The following is a summary of the testimonies presented before the ICHR prepared by the participants:
The context of women’s human rights violations:
• On June 28th, 2009, the democratically elected President of Honduras, Manuel Zelaya, was taken from his home in the middle of the night and flown to Costa Rica by military transport. Since June, frequent power cuts, curfews, the controlling presence of military and police and check points throughout the country, sustained media blackouts, press censorship, repression and violence have become daily occurrences.
• Since the coup, there have been more than 100 non-violent street demonstrations in the capital city of Tegucigalpa alone, all of them disbanded by the security forces of the de facto government. The violence used to disband protesters has varied, ranging from threats and blockades, to the use of tear gas, sound devices, beatings and shooting.
• Women make up over 50% of the anti-coup demonstrators and continue to increase in their numbers and leadership. Honduran Feminists in Resistance is an ad-hoc alliance of dozens of women’s groups and individuals that coordinates pro-democracy actions and participates in the National Resistance Front, as well as documenting and attending to increasing violations of women’s human rights under the de facto regime.
• It is estimated that between 4,000 and 6,000 illegal detentions have occurred since the coup; in the first 15 days after the coup, there were close to 1,000.
• Among the rawest forms of repression against women in this context is sexual violence. From dozens of documented testimonies show systematic intimidation aimed at stopping women from participating in protests and in the resistance. Women report that police and military abuses and attacks are accompanied by threats and insults, such as, “You’re asking to be raped if you get involved in these things.”
• The incidence of women’s human rights violations far exceeds those reported; fear of retribution and threats of violence against victims and their families discourage women from coming forward. Women victims are unwilling to report abuse to the police because police forces are often the perpetrators of the violence in the first place, along with other security forces. Under the de facto regime, the Honduran government’s Office of Women’s Human Rights and Office for Human Rights, which are responsible for investigating and providing legal defense for victims of abuses, have refused to follow up on complaints of human rights violations against security forces.

Specific Human Rights Violations:
During a fact-finding mission with international human rights experts and observers in August, over 400 cases of violations of the human rights of women were registered. Of these, 240 testimonies were documented. The following facts are drawn from those testimonies.
• Among the principle violations that women experience are physical aggression, including kicking, beating, insults, and deep contusions caused by nail-studded police batons; sexual abuse; psychological intimidation and attacks with tear gas.
• Two women, Wendy Avila and Olga Osiris Ucles, died of complications from tear-gas exposure. Nine women LGBT activists were killed, with their bodies showing evidence of torture. The state refused to provide a forensic autopsy for two of the women: Vicky Hernandez and Valeria Ucles.
• The most prevalent forms of police and military violence against women involve insults and beatings aimed at women’s vaginas, breasts, hips and buttocks.
• Of the 240 cases registered, 23 women were victims of groping and beatings targeted to the breasts and crotch area as well as sexual insults and threats of sexual violence.
• Of these 23 cases, 7 involve rapes that occurred in the cities of Tegucigalpa, San Pedro Sula, Choloma, El Progreso and Danli. These were all gang rapes carried out by police and used explicitly to “punish” women for their involvement in demonstrations. It is suspected that all were pre-meditated as the police involved used condoms. These rapes all occurred while the women victims were apprehended after peaceful demonstrations or during curfews. Of these 7 cases, only 1 woman has presented a formal case to the authorities (the Inter-American Commission for Human Rights). The other victims have presented their testimonies to women’s human rights organizations but have refused to register their cases with the Honduran government Office of Human Rights or Office of Women’s Rights.
• While it is certain these are not the only cases, all the women who are victims give three reasons why they do not register their complaints with the authorities: 1) they fear that the inevitable police investigation will involve the men who perpetrated the crime; 2) since the coup, women do not trust the judicial system to provide an effective response; and 3) where cases have been reported, the police have refused to register the complaint, as in the case of a 17-year-old raped in the company of another woman on September 22nd.
• Since June 28th, there has been an increase in the incidence of femicide. According to a report on violence against women produced by UNDP and the Autonomous University of Honduras, 312 women were violently murdered between January and February of 2008; an average of 26 femicides per month. Until March of 2009, there were 16 per month. According to figes from the Office of Women’s Rights, 325 femicides had been reported through the end of September (an average of 31 per month), and during the month of July alone there were 51 femicides.
• Under the dictatorship there has been a rollback of gains in women’s reproductive rights. On June 29th, one day after the coup, an initiative to ban emergency contraception (earlier vetoed by President Zelaya) was approved.
• Since the Decree of September 21st that removed guarantees for individual freedoms, peaceful protests have moved from the main streets to the neighborhoods and communities. To suppress these demonstrations, the de facto government has armed the military with rubber and wooden bullets, nail-studded clubs, batons, metal tubes, eargas and pepper gas. ’. Neighborhood attacks have had a disproportionate affect on women. Attacks are often carried out in the middle of the night by patrols of 4 or more police officers who break into houses and then stay there for many hours. Women with children are unable to flee and are thus trapped in their homes, a situation that increases their sense of vulnerability and defenselessness.
• Women attempting to flee such attacks have been shot during fire fights, There are numerous cases of women who have been detained by police or the military for more than 3 or 4 hours. Detainees report that they were not informed of the cause of their detention and were denied the right to a legal defense. They were also been deprived of medicines, food and water during detention.
• Human rights lawyers are defending 12 cases of women who have been accused of sedition under the decree PCM-16-2009, 22nd of September, which restricts constitutional guarantees.
• The Inter-American Commission of Human Rights required the Supreme Court of Honduras to provide protective orders for 92 women who are under surveillance and who fear for their lives. No action has been taken by the de facto government.
• Numerous women human rights defenders have been persecuted and watched by security forces.
• Feminists and women leaders in the resistance, along with teachers and lawyers with the Lawyers Front against the Coup, have received death threats direct from the police and military, or by e-mail or on cellphone voicemail. The most high-profile women leaders have received threats where the caller uses their name and profession, indicating the level of police and military surveillance of women in the resistance.
• Three radio programs of women’s organizations have been taken off the air and denied broadcasting licenses under coup decrees that suppress freedom of expression. Documents justifying their removal cite their “disrespect for the Constitution” for broadcasting their legal and political analysis and for condemning the coup.
Testimony given by:
Jessica Sanchez, human rights advocate with Honduran Feminists in Resistance
Adelay Carias, human rights advocate with the Center for Women’s Rights and Feminists in Resistance