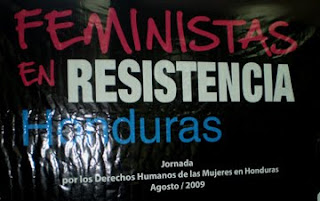 International Delegation Amplifies Honduran Women's Voices
"The police are targeting young people and women, abusing them physically and verbally. The violence against women in resistance is often sexual in nature: both verbally and in the way the police use their batons – hitting women’s breasts and private parts." ~ Observatorio participant.
In July, JASS sent out an action alert on Honduras. To find out what has happened since, visit the JASS Honduran Action Monitor.
This week (August 17–22), an international delegation of women – including human rights activists, researchers, legal experts and journalists from Central America, Mexico, the United States, and Canada – is convening a local and virtual Observatorio (Feminist Transformation Watch) in Honduras to shed light on women’s rights violations under the de facto regime that overthrew the democratically elected president in a coup d’état on June 28th. We invite you to follow and participate.
Organizers: JASS (Just Associates) with Honduran Feminists in Resistance, Las Petateras, Radio Feminista, Nobel Women’s Initiative, and the Consortium for Parliamentary Dialogue and Equality (Mexico)

“A Coup for Lobbyists at the White House” - Though Barack Obama first called the Honduran military’s removal of Zelaya a coup, his administration has backpedaled. Secretary of State Hillary Clinton called Zelaya’s attempt to cross the Nicaraguan border into Honduras “reckless.” Could well-placed lobbyists in Washington be forging U.S. foreign policy? - Read More

Listen to this Column

A delegation from the Inter-American Commission of Human Rights has arrived in Honduras to monitor the situation more than a month after the democratically elected Manuel Zelaya was ousted in a coup. The commission met with local Honduran human rights groups but refused to meet with the interim government. Luz Patricia Mejia is the head of the Inter-American Human Rights Commission.

Luz Patricia Mejia: “The commission will not meet with Micheletti, because the commission has reiterated that it does not recognize Mr. Micheletti as the president. We recognize President Manuel Zelaya as the constitutional president, and because of this we will not have any meetings.”

Luz Patricia Mejia: “Since the coup, the Inter-American commission has received an important number of complaints on violations of human rights. They come from representatives of the unions, social leaders, human rights campaigners, from the feminist movement, and many complaints concern the impossibility of carrying out their functions in a free way.”

Will Venezuelan Destabilization Follow the Honduran Coup? - By Stephen Lendman for Global Research, August 7, 2009 - After ten and a half years in office, Hugo Chavez is very savvy about America's intentions. On January 17, even before Obama's inauguration, he said "Barack Obama has the 'stench' of his predecessor as US president and was at risk of being killed if he tries to change the American 'empire.' "