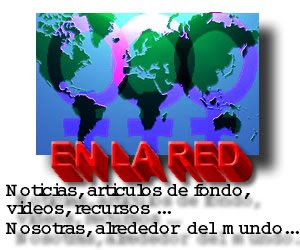 Rape as an Instrument of Total War , by David Rosen for Counterpunch

By Marianne Schnall, The Women's Media Center, for Alternet.org
Six-month-old babies are being raped; men with AIDs are intentionally infecting women. Eve Ensler has a campaign to help end the terror.
Behind the headlines heralding potentially positive developments in the Democratic Republic of Congo (DRC), women and girls continue to be at risk. Media outlets report the arrest of rebel leader General Laurent Nkunda and the possibility of peace openings, but the eastern region where women and girls have been savagely raped and mutilated remains traumatized...more..

Ms. Magazine on Barack Obama: “This is What a Feminist Looks Like”, from Democracy Now!

Guest: Ellie Smeal, Publisher of Ms. Magazine and co-founder and president of the Feminist Majority Foundation.

It’s not surprising to see President Obama gracing the cover of a magazine, except perhaps in one case. The latest issue of Ms. magazine features an illustration of President Obama tearing open his dress shirt and tie to reveal a T-shirt reading “This is what a feminist looks like.” Obama is the first male to appear on the cover in over a decade. Critics have questioned the decision to put Obama on the cover, especially at so early a stage in his presidency. [includes rush transcript]...more..

Iranian Nobel Peace Laureate Shirin Ebadi on Threats to Iranian Rights, from Within and Abroad , from Democracy Now!

Nobel Peace Prize-winning Iranian human rights advocate Shirin Ebadi is on a short visit to the United States speaking out against both American and Israeli military threats to Iran, as well as the growing domestic repression of activists inside Iran. In recent weeks, Ebadi herself as been the target of right-wing attacks in her country. We speak to her about how she is dealing with the climate of repression in her country, her visit to the United States, and why she will continue to fight for human rights in Iran. [includes rush transcript]...more ...

Mistresses of the Universe, by Nicholas D. Kristof for The New York Times..

Banks around the world desperately want bailouts of billions of dollars, but they also have another need they're unaware of: women, women and women.

At the recent World Economic Forum in Davos, Switzerland, some of the most interesting discussions revolved around whether we would be in the same mess today if Lehman Brothers had been Lehman Sisters. The consensus (and this is among the dead white men who parade annually at Davos) is that the optimal bank would have been Lehman Brothers and Sisters.
Wall Street is one of the most male-dominated bastions in the business world; ...more..

As the coalition I'm working with--Get Afghanistan Right--continues to make the case that the Obama administration would be wise to rethink its plan to escalate militarily in Afghanistan, I've tried to engage the arguments made by some feminists and human rights groups who believe that such an escalation is necessary to protect Afghani women and girls. I share their horror when I read stories like this one by New York Times reporter Dexter Filkins describing an acid attack against girls and women--students and their teachers--at the Mirwais School for Girls. But how will escalation or increased US troop presence improve their security or make their lives better? ...more..

Teen Pregnancy a Myth? Not So Much., Posted in Feministe.com

Some of you may or may not have seen Tara Parker-Pope's article last week in the NY Times on the "myth" of teen pregnancy. While she is right that we overhype and overblow the "dangers" of teens' sexuality, don't be fooled that teen pregnancy isn't a problem. The U.S. still has the highest teen pregnancy rates when it comes to industrialized nations, and when you look at the rates for young women of color it goes through the roof...more..